In the century-old suburb of Carolina Heights, back when canary-yellow trolley cars still ran from downtown to the beach, a two-story house was built on a corner lot. Unlike many of the other homes in the neighborhood, there’s no historic plaque near the front door. It’s certainly eligible, residing in the official historic district, but the research has not yet been done. The new owner seems to prefer a bit of mystery, or maybe she’s just been so busy restoring it to its former grandeur that she has shrugged off worrying about its past. We don’t yet know the name of the man or woman who chose the design from the Sears-Roebuck catalogue over a hundred years ago and purchased the ground. But we know that the pre-cut pieces arrived by train and were assembled in 1910. Aside from those details, all Gay Adair needs to know about her new home is that for over a hundred years, it sheltered many lives until it, like her, had fallen on hard times.

When she took possession in late 2012, all but two of the floor joists in the kitchen had rotted. Walking on the layers of pegboard that had been installed as a patch felt like walking on a sponge. Outside, shutters hung at oblique angles. The place was in such remarkable disrepair that One Tree Hill featured it in an episode called “Not Afraid” as the creepy house that was too scary for trick-or-treaters to approach. Inside the entry hall, peach wallpaper with images of black and white women in antebellum dresses walking amidst blooming magnolias and plantation homes.  The carpet reeked of dog. The bathroom walls featured gods and humans frozen in mid-bacchanalian orgy. The shower was stacked with trailer tires. At the top of the stairwell: a wall. A person could walk up a few steps, turn left; up a couple more, turn left again; up the last few and all you could do was try to listen through the barrier separating the house in two. The only way to access the second floor was a set of wooden stairs in the backyard. Inside felt “dark” and “oppressive,” according to a neighbor who admitted that she couldn’t believe someone actually lived there. Yet someone did, in fact. A venerable man who kept his bed in the dining room. He passed away four months before the house was sold.

Having known Gay Adair for the past eight years, I asked her if she felt like the state of the house was anything like the state of her life when she bought it. She had been smoking a Sherman cigarette by an open window but turned immediately. “Yes,” she said. “It was exactly the same. That’s why I was undaunted.”

I first met Adair when she opened her second furniture store, the Gypsy Jewel Wagon, downtown. Many others remember her from her first, The Red Dinette. Fewer people know that before her career in interior design she was a modern dancer for eighteen years and studied under Martha Graham in New York. There’s a photo of her posing in tights in her downstairs bathroom. After New York, she returned home to Arkansas and found her own troupe, the Church of Perpetual Motion, named for the old church where they practiced. She fell for the dilapidated structure because it was never modernized. The attic became her living space; the Sunday school room, her kitchen. In the sanctuary, she danced and choreographed with others, later receiving a national endowment grant. She had invested so much of herself in the building that when it became time for her to move on, she was confident it would sell. “I had this really crusty, chain-smoking realtor,” she said. “I was so proud when I showed her around. And do you know what she said when I asked how much she thought it was worth? She said, ‘Burn the son-of-a-bitch!’” 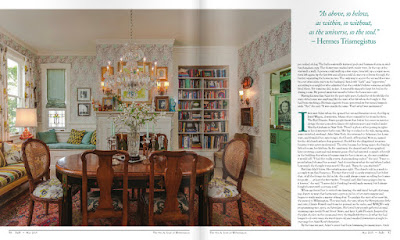 But Gay didn’t listen. Her intuition was right. The church sold in a week to a couple from San Francisco. The fact that it sold so easily reinforced her belief that, of all the things she did in life, she could always count on selling her homes for profit . . . at least the first twelve. “I treated each like I was going to live in it forever,” she said. “I never did it thinking I would make money, but I always bought houses with a certain soul.”

When age forced her to retire from dancing, she embraced her gift of arranging objects in ways that harmonize a person in his or her environment and began to study under a master of feng shui. To catalyze the start of her new life, she moved to Wilmington. This was back, she says, when the Henrietta was little and cute, Claude Howell read from his journal on the radio and WHQR’s only programming was opera on Saturdays. She loved how people gathered around steaming cups inside Front Street News, and later, Caffe Phoenix. Inspired by the play of color on the ocean and river, she finally felt free to do what she had longed to do ever since she was 6 years old and snuck downstairs at night to rearrange her Aunt Rosy’s furniture. 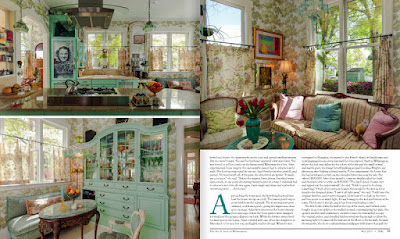 By the time we met, Adair’s career had been humming for many years. Aside from local clients, she spent weeks on the road and earned excellent money. But she wasn’t happy. She and her husband separated a few years later. She was forced to sell her condo on the Intracoastal Waterway for a loss. After experimental brain surgery, the once nimble dancer had to relearn how to walk. Her hearing evaporated in one ear. And then her mother grew ill, and passed. Yet underneath all of the pain, she discovered an upside. “It made me a lot nicer,” she said. “Before the surgery, I was driven. I worked seven days a week, at one point decorating twenty houses at a time. I suddenly had to relearn how to live all over again. I was single and alone and scattershot everything until . . . this house.”

Approaching the front yard, the first thing I noticed was how the house sits up on a hill. The lowest porch step is at eye level from the sidewalk. The front windows peer outward, as if from a perch, giving the impression of an actor on stage. Adair first discovered the house 23 years ago, before the brass gutters were swapped for vinyl and the garage collapsed out back. While the former owner lived his final year in the house, Adair traveled to Marrakesh, to be near her son, an English teacher abroad. When he was reassigned to Shanghai, she moved to the French Island of Guadeloupe and took language lessons every day until her visa expired. Back in Wilmington, where she had once fallen for the colors of the sky and the smell of mud and marsh grass, she found herself walking around Carolina Heights one afternoon after helping a friend nearby. To her amazement, the house that she had developed a crush on two decades before was now for sale. She offered $100,000. After three months, someone finally called her back, and they were able to settle on $130,000.

“The day I closed, I came over and ripped out the carpet myself.” she said. “It felt so good to be doing something.” Of all of her previous homes, this would be the first in three decades she designed alone. “I saw it all right away,” she said. “I still have the original sketches, and it never changed. I love how it’s so high in the trees and has access to so much light. It’s my homage to the feel and history of the town. This house is the lab, and it has been very healing to me.”

She first broke down the wall at the top of the stairs, and burned cedar boughs in an iron skillet as she walked around, contemplating her plan. She opened another wall downstairs, careful to have the trim milled to copy the original arches, and installed kitchen windows big enough to allow the morning light to bounce all the way across the floor to the far wall. Around the windows, she chose a sylvan-themed wallpaper with leaves that pull the outside trees in with a Disney-like magic. “When I’m planning a room, I always ask, do the colors pull me in from the front door?”

Of the many intriguing objects, two in particular snagged my eyes. The first is a black-and-white photograph of a young woman smiling brightly, which is actually the door of her fridge. While envisioning what to install for this centerpiece, she just happened to be unpacking a box in which she had rolled up the image of her mother that she had blown up for her ninetieth birthday. “My mother was a powerhouse,” she said. “She was the first woman president of a telephone company even though she never went to college. We flew all over together and went to nice restaurants. It became a family joke that I would always have to go to the bathroom as soon as we sat down so I could explore all of the rooms. When I unrolled that photo, I ran down the stairs like I had won the lottery. And it fit so perfectly in the space.”

The second object is a photograph of a woman tickling her bare derrière with a feather. But even if you get caught staring at it, as I often do while washing my hands in her kitchen sink, it’s easy to save face with a quick glance around, for there is fascination everywhere. An old sign warns ‘Safe Cooking is Good Cooking’ and it has done so in every kitchen she has ever owned. “My kids fight over who gets that one,” she said. “It’s funny. With fire and knives, there’s nothing safe about cooking.” Maybe so, but at least her kitchen floor is no longer sagging. After investing an additional $225,000, the house now sits on a solid foundation with a new roof overhead. There’s a new garage in the works, as well as a saltwater pool. But the transformation hasn’t always been peaceful. The morning after the massive hole was dug in the yard, she had a terrible dream and couldn’t sleep. Feeling a need to mend the damage, she called a healer friend named Joyce who led her through a meditation of protection and renewal. They burned sage afterwards and spread sea salt around the perimeter of the yard. “Joyce felt the presence of more than one friendly female spirit,” she said, “and I have felt nothing but safety and creativity ever since. It’s become hard for me to leave.” 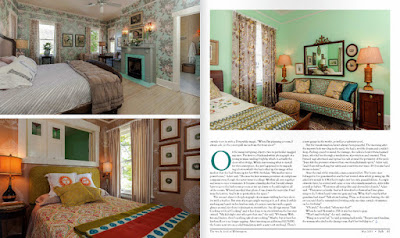 Near the end of the remodel, a man contacted her. The house once belonged to his grandmother and he had visited often while growing up. He asked if it would be OK if he brought over his own grandchildren. A couple of weeks later, he arrived with nine or ten other family members, older folks as well as babies. “They were all very polite and dressed for church,” Adair said. “They were so lovely. And as I described to them what I was planning to do, I often heard someone gasp and say,

‘Why, that’s exactly what grandma had done!’ Talk about healing. Then, as they were leaving, the oldest son said that he remembered visiting only one time outside of summer, on his birthday.”

When he said November 25th it was her turn to gasp. “That’s my birthday,” she said, smiling.

“Hang on to your hat,” he said, pointing back inside. “Because my Grandma, the woman who died in the dining room, that’s her birthday too.” 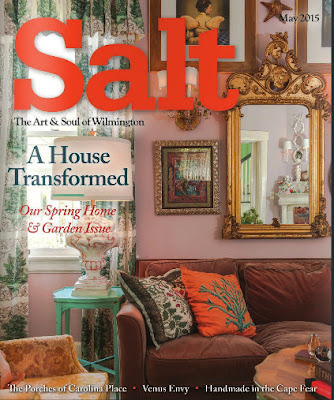