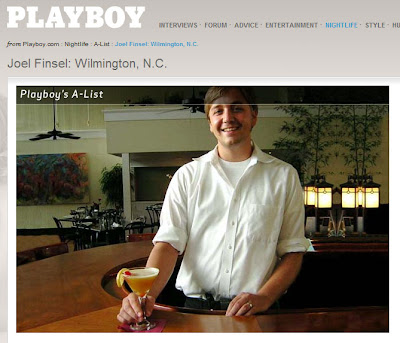 "It was Thomas Mario’s Playboy Bartender’s Guide that sparked mixologist Joel Finsel’s libation fascination, and first revealed to him a healthful side of imbibing that originated in the secret distilleries of 15th century monasteries. “I was given [the book] as a gift and read about spirits and how they got started,” says Finsel, bartender and curator of Caffe Phoenix in Wilmington, N.C. “Spirits were viewed both as revivers and internal cure-alls, and could also be used as antiseptics for wounds. There’s a long history of spirits as medicine, which we've gotten away from with the advent of thick, syrupy flavorings." Finsel, who wrote a book about the colorful clientele he encountered during his four years as a bartender at Philadelphia’s Astral Plane, focuses on elixirs; tonics; clean, pure alcohol and replenishing ingredients."  (Read more...)