Nearing manna's third year in operation, I've been reflecting on the evolution of our cocktails.

The summer afternoon in 2009 Billy Mellon called to say he was quitting the wine sales racket for good and wanted me to help him create the bar program for a new restaurant he was opening on Princess St., I knew it was the opportunity to actualize what had been marinating in my mind since I first attended Tales of the Cocktail in 2006.

Hurricane Katrina had wrecked nearly everything eleven months earlier, but the cocktail convention persevered despite a few electrical blackouts. I was young and foolish, but because I had been tending bar for seven years then and had a few original recipes published, I felt like I might have something to contribute. Reality proved I was completely out of my league. I was terribly behind, though still a little bit ahead of the slow curve back home.

Inspired, I created the restaurant-bar-where-I-worked's first cocktail menu. And many more would follow after future New Orleans seminars in 2007, 2008, 2010 and 2011, including an updated ice program, our insistence on fresh juices, a variety of home-made syrups and bitters, as well as our fairly recent experiments in barrel-aging.

To honor manna, the small satellite of the craft-cocktail renaissance in Wilmywood (and also because our web guy seems to have a hard time keeping up with our ever-changing lists on the restaurant's site), what follows is a retrospective sampling of our menus past.

Co-created with Karl Amelchenko in early 2011, while not our first menu (we had already been open for about six months by then, although quietly, taking the first few months to find the holes), it helped establish us as the first craft-cocktail joint in town. 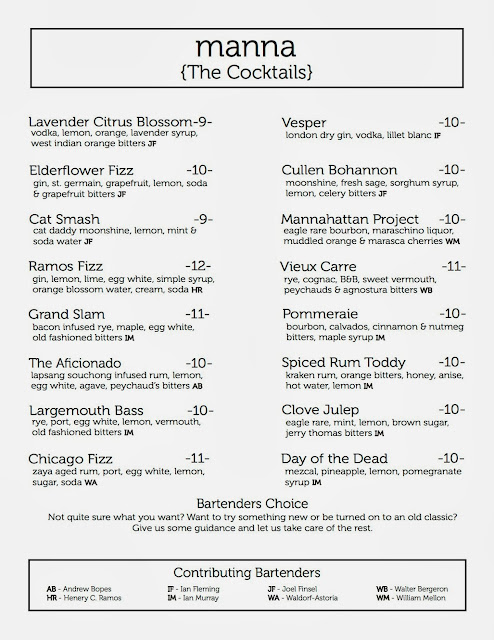 When Karl's license to practice law in NC came through, after scouting around town I decided to approach Ian Murray, a young man now working my old job at Caffe Phoenix. He had taken what I had already started there and ran with it.  When I heard he was a transplant from Philadelphia like me, albeit six years later, I took the coincidence as a strong omen and invited him to bring Billy his resume. Lucky for us, he's already proved to be a star, winning a food festival cocktail contest in Moorehead City with his Aperteavo.